We campaign on a range of legal issues affecting women and support a number of campaigns by other organisations.

Without legal aid women are unable to access the legal remedies the law affords them.  One woman told us that the loss of legal aid will have a “devastating effect. It will be a dangerous situation for abused women, they will stay with abusive partners or they will flee a home when they are the ones that deserve to stay in it.”

Since the publication of the Legal Aid Sentencing and Punishment of Offenders Bill we have campaigned to hold the Government to their promise that legal aid for family law cases would not be lost to those affected by domestic violence.

During our campaign we briefed Parliamentarians, gave evidence to the House of Commons Select Committee on Legal Aid, met with ministers and civil servants and protested outside Parliament. 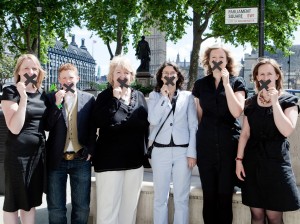 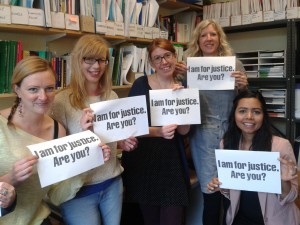 We achieved important victories during the passage of the Bill including the inclusion of the definition of domestic violence in the Act and the broadening of the domestic violence gateway to include referral to MARAC and reports from health professionals.

Yet after the implementation of the new domestic violence gateway criteria, our research shows that the legal aid regulations continue to restrict access to legal advice and representation to women affected by domestic violence and deny access to safety and justice to the very women whom the Government expressly sought to protect from the removal of family law from the scope of the legal aid scheme.

Our research shows that:

Amendments and additions to the evidence criteria introduced in April 2014 were welcome and mean that more women affected by violence will now be eligible for legal aid but there remain fundamental problems with the gateways.

The strict evidence requirements make it difficult if not impossible for women to evidence emotional and psychological abuse and the two year time limit on most of the evidence simply does not reflect to reality of the ongoing risk of violence women and children experience.

For this reason our campaign continues.

Read more about our campaign to save legal aid here

We are a member of the End Violence Against Women Coalition which campaigns to end all forms of violence against women.

Find out more about the work of the Coalition here 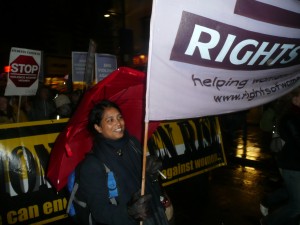 Every woman seeking asylum in the UK should be treated fairly, and with dignity and respect.

We are a member of the Women’s Asylum Charter a coalition of organisations calling for minimum standards in the UK asylum system to address the inequalities in the system for women fleeing persecution and violence overseas.

Now is your chance to help close the protection gap for women seeking asylum.

Take action in the new campaign which starts today!

In the past few months new initiatives have come into play for women facing rape and violence at home and abroad.  But women seeking asylum are falling through a protection gap.

William Hague and Angelina Jolie signed off an international agreement on how a woman raped during a civil war should be supported.  But if that woman comes to the UK to seek protection she isn’t guaranteed the same support.  There is a glaring hypocrisy in how we treat women and girls who seek protection in the UK; they continue to be missed out of government policies on violence against women.

We believe that no woman seeking asylum should have to tell her story:

We believe that five particular measures in Hague and Jolies’s international agreement are also vitally important for women seeking asylum in the UK.Let’s tell Theresa May, the Home Secretary, to use her powers to put these measures in place in the asylum system now

Visit www.asylumaid.org.uk/protectiongap to find out how.