‘The legal landscape for women and challenges ahead’

We wish to thank to all those who attended our Annual General Meeting at Resource for London on Wednesday 6th September and made it such a success. 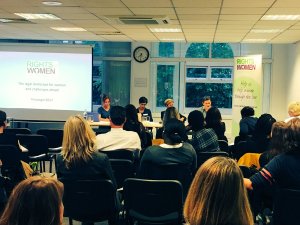 We are particularly grateful to our panel of speakers who spoke on the subject of ‘The legal landscape for women and challenges ahead’. Their observations on the culture change that needs to occur to end violence against women and how the law is and can be central to this stimulated a positive debate during the question and answer session after they spoke.

Our summary of their speeches are below:

Jenny Beck (Family law solicitor, ROW advisory board member and also Chair of the Law Society’s Access to Justice Committee, Co-chair of the Legal Aid Practitioners Group) spoke about ROW’s successful legal challenge of the domestic violence (DV) legal aid gateway in 2016 and our hopes for what changes will come from the subsequent review of the regulations. She reminded the audience of how the introduction of the Legal Aid, Sentencing and Punishment of Offenders Act 2012 (LASPO) had changed the legal landscape immeasurably by taking so many areas of law out of scope suddenly and how this had impacted on women in particular. She outlined the difficulties around the gateway regulations that women have faced when trying to meet the strict evidence criteria from external sources to prove they have faced DV. She explained how hard the evidence criteria were to meet particularly where financial abuse or coercive control has occurred. One of the detrimental impacts on women survivors when being confronted with such a list is a sense that their word is not enough and that they can only be believed if a third party can confirm it. She explained that therefore one of the hurdles that any new regulations needs to address is to ensure it reflects the reality of women’s experience and does not exclude some types of abuse or further a culture of disbelief otherwise women will not be afforded the proper protection they deserve.

Sarah Ricca (Centre for Women’s Justice) spoke about the newly formed Centre for Women’s Justice (CWJ). The CWJ has been formed to address the issue of violence against women (VAW) and intends to bring together experts, lawyers, activists and survivors to bring strategic law challenges and ensure access to justice for survivors of violence and abuse. Sarah outlined the extent of VAW in the UK – where 29% of women have experienced domestic violence or abuse – and explained that in comparison to other EU countries, the UK has the fourth highest rate. She highlighted strengths and weaknesses of the legal system to address this high prevalence through a series of examples, both historic and recent. The case examples demonstrated persistent gaps that can contribute to a cycle of impunity where perpetrators are not held to account. She spoke in depth about the fundamental need for the law to enable not only addressing failings after the event but also to enforce positive duties (on the state) that can effectively prevent failings occurring.

Katie Ghose (CEO – Women’s Aid) gave an overview of what the proposed new Domestic Abuse legislation, outlined in the Queen’s Speech earlier this year, is likely to address and what is needed to ensure it has a real impact for women. The Government has presented its vision for the new Bill and the accompanying non-legislative package as being able to make a positive contribution to culture change in relation to domestic and sexual violence and abuse. The Bill is expected to include: a definition of domestic abuse (as it is currently not defined in law); consolidation of the civil prevention and protection order regime related to domestic violence and abuse; new sentencing to reflect the detrimental long-term impact on children of witnessing or being involved in domestic violence or abuse; a new Commissioner to represent survivors and hold the justice system to account; and, measures to allow ratification of the Istanbul Convention. Katie spoke about women’s needs in relation to each area based on Women’s Aid’s experience and contact with women as a frontline organisation. She then outlined three crucial tests that Women’s Aid will therefore be using to measure the effectiveness of the proposed Bill; the areas where they want to see the Government deliver relate to women and children; ensuring routes to support and addressing the existing ‘postcode lottery’ that exists when accessing support services.